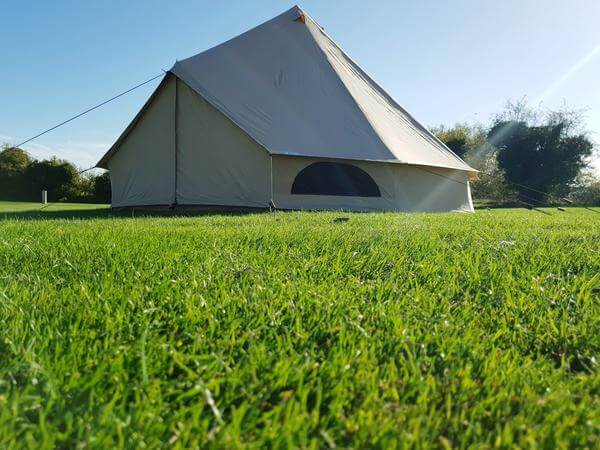 Very positive and I am delighted with the tent. Prompt delivery. Great technical information and advice. It would be lovely to have a named contact as I’ve noticed all comms have no sign off. Shame as you are professional, knowledgeable and I enjoyed the dialogue

Wow what a hit ! Son and his friends planning dream nights away since the unveiling of sons surprise present. He's into modern folk music and plays guitar and we forfilled his dream with this purchase. He can now sit by the fire pit strumming with a quality tent accommodation. It was easy to put up. The canvass is brilliant quality and it will last for years. It's December and there's been heavy rain but you can see quality of waterproofing. The guy ropes and pegs are really substantial. We have heated this with a small electric stove and it's perfect environment. His friends loved it and he's already making the most fantastic memories !

Excellent. Very easy to put up. Bought for outside entertaining in garden. Ideal for camping trip. Definitely recommend.

We have not yet assembled our bell tent as we are due to go away in 2 months when we will be using it, however the customer service when ordering this was brilliant. Bell Tent Village were friendly, helpful and informative whilst we were deciding on the best tent to order. It arrived on time and we love the care that has gone into the storage of these. Each bag has different parts inside them and they are all stored in a high quality thick material branded with their logo.

My wife and I have run a small glamping site, with bell tents, for over 10 years now. In 2019, my bell tent supplier stopped trading, so I had to find a new supplier. I assessed many offerings and narrowed them down to this tent and one from another supplier. For 2020, I split my order and bought from both. We had a relatively short season due to Coronavirus distruption, but this bell tent well out-performed the competition. The workmanship was good, the tent shape and the well-tensioned heavy-duty fabric stood up well to the windy travails of the West of Ireland. I normally replace guy ropes when I buy in tents with heavier duty ones, but in this case I was happy to use the ones that were supplied. Lots of nice touches, like handy internal pockets, as well distinctive styling with black mesh and trim highlighting, which helped make these stand out from the crowd. For the 2021, I have already ordered exclusively from Bell Tent Village.