Now with an added stove hole and a neat stove cover flap that can be used to cover the hole when your stove shoot is not in use.

Our Fire Retardant range has an approximate GSM weight of 350- 370 GSM. The weight frequency of the fabric may differ slightly due to the fire retardant treatment.

Please note, our tents may appear slightly lighter on images.

Gorgeous and lots of space

Haven’t used it as yet for a camping trip but set it up in the back garden to get an idea of it. Feels very well made and sturdy, it looks gorgeous too. In all I am very happy with my purchase. 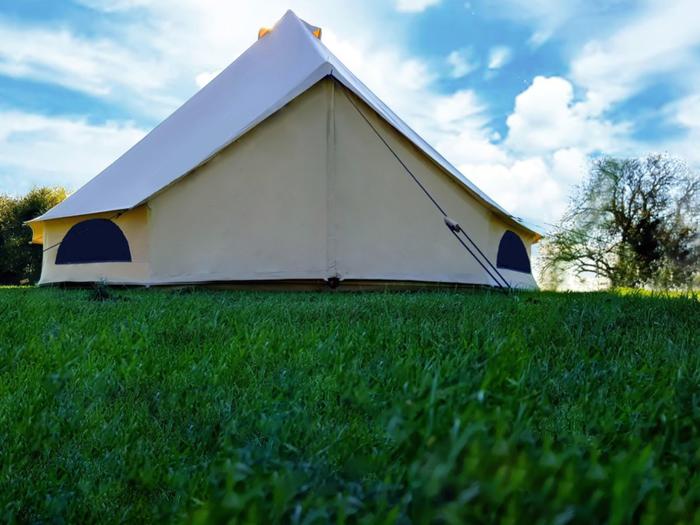 The Bell Tent is amazing! The kids love it and put it up all by themselves! It's spacious and perfect for a family.

Great service, speedy delivery and a good quality product. Our guests have given us positive reviews about the bell tents as well.

Great tent, easy to put up, held up well to the windy weather. Added a stove , and it was very warm inside, perfect for the 1 deg. C night! They send it to Greenland

I have ordered to my home Ilulissat Greenland in the Arctic. And my new canvas tent arrive today by airplane. It's a good service by the company. I give it 5 stats. I will send pictures when it's ready to use. First in June it Will be summer here for 3 month. Was very excited and pleased withthe site, brand, product - but you had a promotion on and I missed applying the discount code because of system/feedback delays. You had a great opportunity to apply the discount - value £15! and have me raving about you and looking for accessories etc with you. Instead I feel a bit cheated - I got a personal email post order from Lee - to check if there was anything I needed (impressive) - I flagged the request to apply the code and was told to use the code against any future purchase. He/you made a decision to save a few quid - eroded the transaction and value of the brand. Well done. When people ask me about my great tent - I tell them about my little disappointment and Bell Tent Village (especially as you sell the tent cheaper on Ebay). 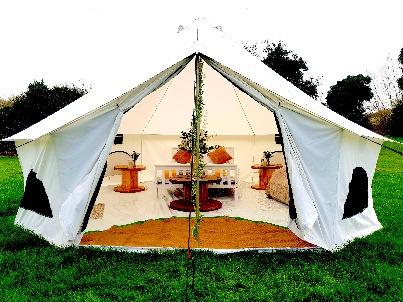 Great people to deal with

A pleasure to use. Great bit of kit

We’ve had a 4m Soul Pad (SP) bell tent for around 7 years, camping in France and at festivals, spreading the cost over use it’s now at less than 30p a night; it’s been well used. Now that the kids have left home, we’ve started to take longer holidays and really wanted more space, as well as ducking in and out of the tent was causing backaches. After some discussions with Lee at Bell Tent Village about door heights he recommended the 5m XL. It arrived yesterday and we took it to the local rec to put up. The first thing that struck us, is that it is heavy, really heavy, at 33kg, the SP was 10kg lighter. It arrived in a canvas bag, a bag for the poles, and a peg bag with pegs and a mallet. The pegs are really tough, I don’t think we’re going to be bending any of these soon. Opening it up, the construction, finish and attention to detail of the XL is way beyond the SP. The canvas is much heavier, and all the seams are taped, in the SP most were left rough cut and of variable size. There are loops and duffle coat style pegs for all the doors and windows, whereas in the SP some were missing and others were double sewn into the seam. Putting it up is straightforward, a one person job in about 15 mins. Once up, the XL is palatial. Whereas in our SP the bed just fitted between the centre pole and the wall, in the XL I can hardly touch them with my arms stretched. The best bit for us is that door is over 6 foot high making it easy to get through without bending. Looking forward to the holidays.

Please note that use of stoves and heating equipment is done so at the users own risk. Bell Tent Village is not liable for the use of such equipment within the tents. This tent is not fire retardant!

Although my tent was delayed Bell Tent Village kindly upgraded my tent and other items free of charge as well as special delivery. Communicates fast. Very happy with my tent and the quality is 10/10

The BTV series 2 Emperor Cotton Canvas Bell Tent available in white or black mesh windows and doors is all you need this summer to rouse holiday spirits. Crafted to the highest standard and available in white or black mesh. The BTV Emperor Cotton Canvas Bell Tent will help you feel at home whilst away. Crafted from the finest premium, 285gsm-300gsm thick, natural, dyed cotton, our bell tents regulate efficiently, leaving inside feeling cosy, warm and tranquil.

UV, Mould and Water repellent treated to insure that all our BTV Emperor Cotton Canvas Bell Tent can withstand harsh UK weather conditions or even hot sunny locations too.

Please note that use of stoves and heating equipment is done so at the users own risk. BTV (Bell Tent Village) is not liable for the use of such equipment within the tents. This tent is not fire retardant! 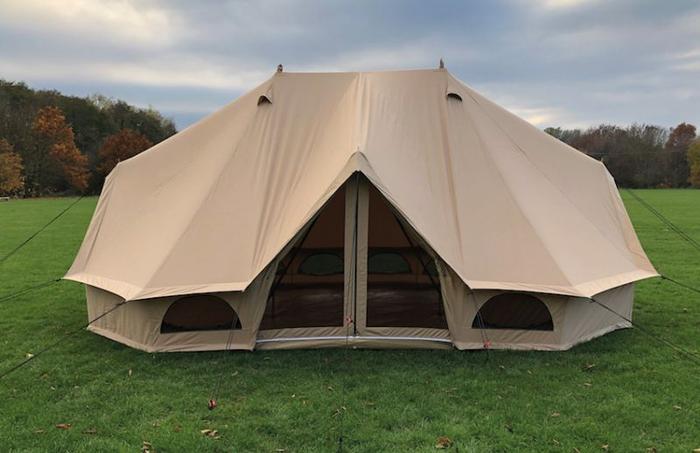 Many happy years to come

There is ample space for us and the 4 kids and even space to relax. The emperor is easy to pitch and put the poles up. It needs two adults but is far quicker than any other tent of similar size I have ever had! Thick canvas and good sturdy guy ropes and adjusters add to the feel of the high quality nature of the tent! Look forward to accessorising it in the future. Many happy years of camping to come!!


The BTV 1 XL Skylight is a very special edition of the classic Bell tent. Based on the same layout as the Bell it has higher sides for extra space inside and a full Stargazing roof. The tried and tested classic bell tent design has been around since the 9th century so you can be confident that this tent will be ready for action whether in the summer or the heart of the winter. As the tent features the 100% cotton canvas in the summer the tent will be breathable keeping it cooler compared to typical polyester and polycotton tents. Yet in the winter the insulation properties will make this tent warm and cosy so you can camp all year round safe in the knowledge that you have made the right decision.
The BTV 1 XL Skylight then adds to this classic design, as it has extra high sides giving extra room and added light and air inside the tent making it feel even larger inside. It has mesh panels with internal blinds around the base of the walls and thanks to their larger size gives an amazing amount of air flow when required and full double layered mesh doors allowing an amazing amount of air flow when the weather is hot. This roof gives you windowed panels around the entire roof along with an umbrella style blind on the inside. This allows you to open up the roof to give you a simply stunning view of the sky whilst keeping you private and secure in your Bell tent.

Orders will be processed in GBP.